We Are Your Solution for Design and Marketing

Westside Media is a professional, full service design firm located in Chillicothe, Ohio. We serve Ross County Ohio, Columbus, Dayton, Cincinnati and all surrounding areas. With that said, we have also successfully completed projects across the country! Big or small, every client and every project is as important to us as our own. Our proven track record and positive client interactions have resulted in a long list of much-appreciated client testimonials that can be viewed right here on our website.

We want to be an extension of your company by serving as your personal design studio and providing the individual attention your business deserves. Whatever your design needs may be, Westside Media will provide a thorough and unique solution created specifically for you.

Designers, web developers, illustrators, photographers and more, Westside Media can handle of all your creative needs.

Our professional team is flexible and changes depending on the needs of our clients.

Born on an American naval base in Rota, Spain, Stephen has lived in 3 countries and 4 U.S. states. He attended Judson University in Elgin, Illinois where he studied Communications/Media Studies and Graphic Design. Stephen worked as a desktop publisher and database programmer for a division of Mitsubishi in the Chicago area before moving to Chillicothe in 2002 to start Westside Media.

In addition to overseeing the business, Stephen is deeply involved in all aspects of the design process. He loves bringing projects from concept to finished product. Whether it's a new website, a new logo, or a new print design, he loves to create. Stephen's favorite part of his job is making connections with other businesses and watching them succeed. Westside Media has been blessed with the opportunity to work closely with hundreds of clients and we are thankful every day for that.

If this design career doesn't work out, Stephen plans on picking up where he left off in the early 90s as the greatest rapper east of Dayton. 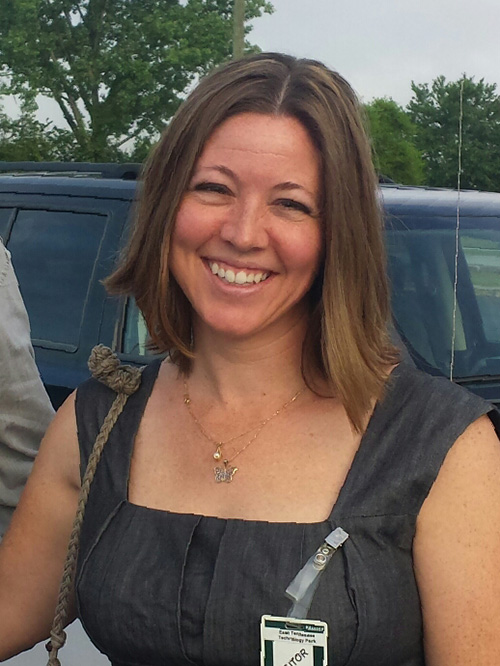 Melissa is proud to have been born and raised in small town Chillicothe. Being a "local" affords her strategic insight into the local demographic and how local businesses can effectively market and network. Melissa pursued her education at Judson University and graduated with a BA in Early Childhood Education and a minor in Psychology. She joined Westside Media in 2008.

Melissa provides consultations for websites, branding, and marketing and is a project manager, working as a liaison to provide a seamless experience for Westside Media customers. She also assists with content writing and social media marketing. Melissa's favorite part about her job with Westside Media is meeting new clients and strategizing to provide them with the best marketing solutions. She is a problem solver, advice giver and quickly comes on board with customers to deeply understand their business so she can best advocate for them. She also loves being the voice of the client while working closely with the design staff so the client's vision is molded together with the creativity of the designer.

Together with her husband and Westside Media owner Stephen, the couple has 3 children: Dawson, Rylan and Carly. Although Melissa and Stephen love being business owners, the parenting project is the one that makes them the most proud.